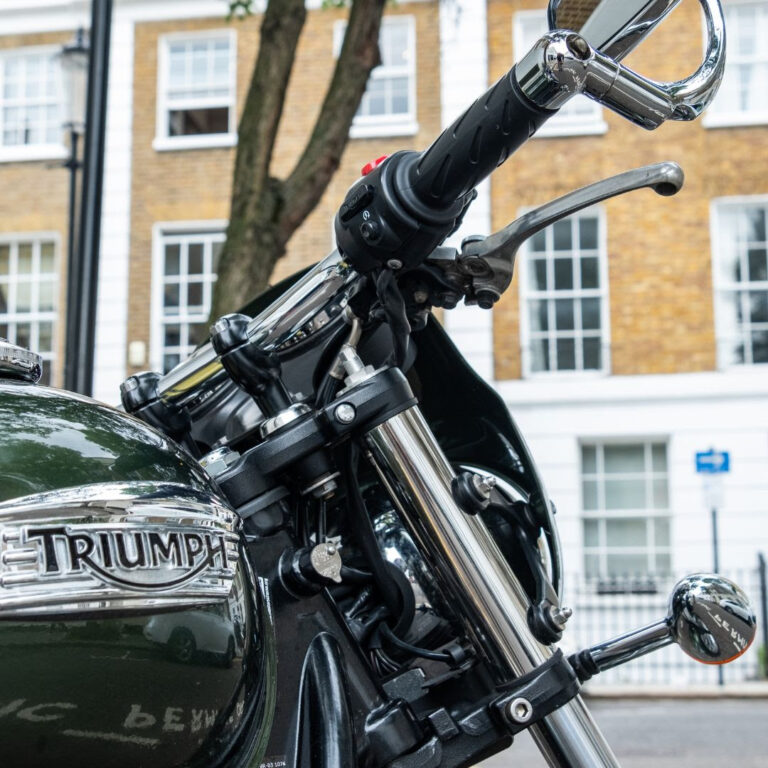 For years I’ve had this recurring dream. I’m on a Triumph Bonneville cruising down a winding country road. It’s early fall and there’s a slight chill in the morning air. I’m wearing a waxed cotton motorcycle jacket over a tweed sport coat, tweed pants, leather boots, and a custom made matte black helmet. As the road curves to the left, I lean the bike over, reach down, and drag a gloved hand across the asphalt, a tactile reminder that I am in the south of England, riding towards a grand destination – the seat of the Dukes of Richmond and the Goodwood Revival.

The problem with this dream is that I’ve never been on a motorcycle. I know nothing about them other than that to my eye, certain motorcycles, especially models such as the Bonneville, the Royal Enfield Classic 350, and the Moto Guzzi V7 Stone, are stunningly beautiful works of art. I also know that owning a motorcycle, at least in my opinion, lives somewhere in the hazy intersection in the Venn diagram of dangerous, impractical, and completely badass.

Last month I decided it was time to turn my dream into reality so I purchased tickets to the next Goodwood Revival scheduled for September 2023, and signed up for a two-day motorcycle training class at the BMW Performance Center in upstate South Carolina. I was one of twelve participants and each of us was assigned a BMW G310R. As soon as I straddled the machine, I realized how naive I had been. Riding a motorcycle is not like riding a bike. Motorcycles are heavy and maneuvering them requires balance and agility. And unlike driving a car, where several miles can pass before one realizes one isn’t paying close attention, motorcycles demand constant vigilance. I spent two days stalling the engine, knocking down cones, and trying not to fall over. At the end of the final day, the lead instructor took me aside and said “You need a lot more practice.”

Despite my poor showing, I’m not quite ready to give up on my dream, at least not all of it. I do plan on taking a few more motorcycle classes in hopes my skills will miraculously improve, but when the fateful day comes next September and I don my tweed suit, I’m fairly certain I will roll into Goodwood on four wheels rather than two.