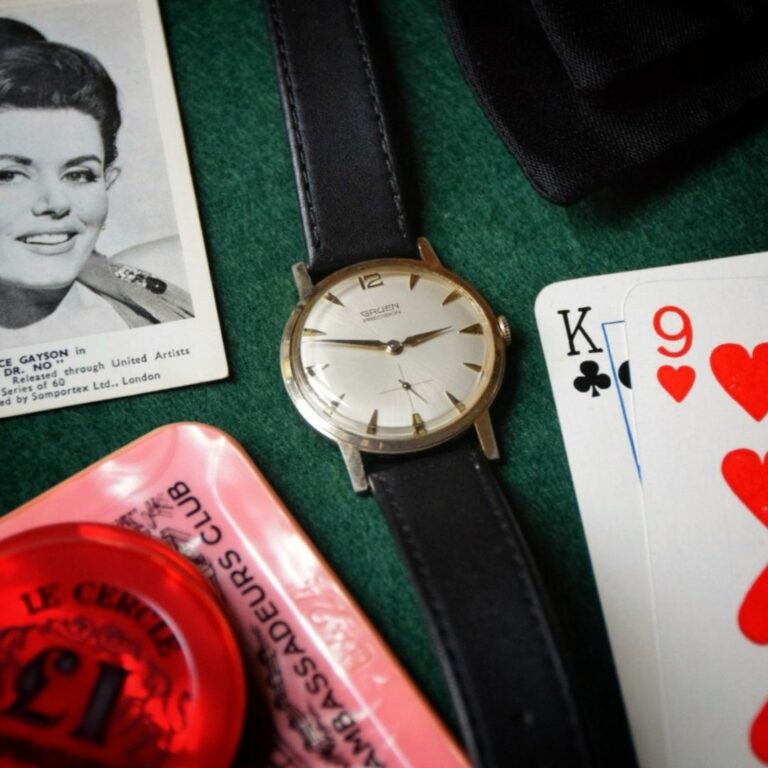 “The scent and smoke and sweat of  a casino are nauseating at three in the morning…”
With these words, Ian Fleming introduced the world to James Bond in Casino Royale.

Of course, the first Bond saga made into a feature-film was not Royale but Fleming’s sixth — Dr. No. In what was perhaps a creative salute to the literary opener however our first introduction to Sean Connery’s Bond occurs similarly in a scene (not featured in the Dr. No novel) at a casino at around 3am. Across Pinewood’s recreation of the exalted baize of Le Cercle’s chemin-de-fer table at  Les  Ambassadeurs — the private members gaming club in Hamilton Place, just off Park Lane — director Terence Young imbues Bond with suitably spy-like mystery as he unveils him shot-by-shot for the silver screen.

At first, we see his left-hand on the card shoe, the bright white cuff of his pleated Lanvin shirt — gold dress watch hidden underneath — contrasting with the midnight-blue of his Anthony Sinclair shawl-collar dinner suit and engine-turned square-cushion gold cufflinks.

Bond wins a run of hands against his first cinematic combatant, an elegant brunette in a red chiffon-dress sitting opposite him in  Position 11. We hear Bond’s voice before we see his face; gentleman-like in victory he complements her courage before inquiring her name whilst taking a cigarette from his gun-metal case.

“Trench — Sylvia Trench” she replies before enquiring the same. His iconic reply, a baritone echo of her own, uttered as he ignites his cigarette against the flame of his Dunhill Broadboy Mk.2 before clicking it closed.
The pause and the cadence almost percussive against John Barry’s building orchestral score. The air becomes richer with blue cigarette smoke as Bond wins again “Neuf ” to Ms. Trench’s solid “Huit”.

He raises his cigarette to his lips revealing the sunburst dial of the Gruen Precision 510 wristwatch underneath his cuff before the concierge brings to a close both his and our pleasure, and perhaps the most iconic scene film scene ever, with a coded-message — it’s time for a new mission to begin.