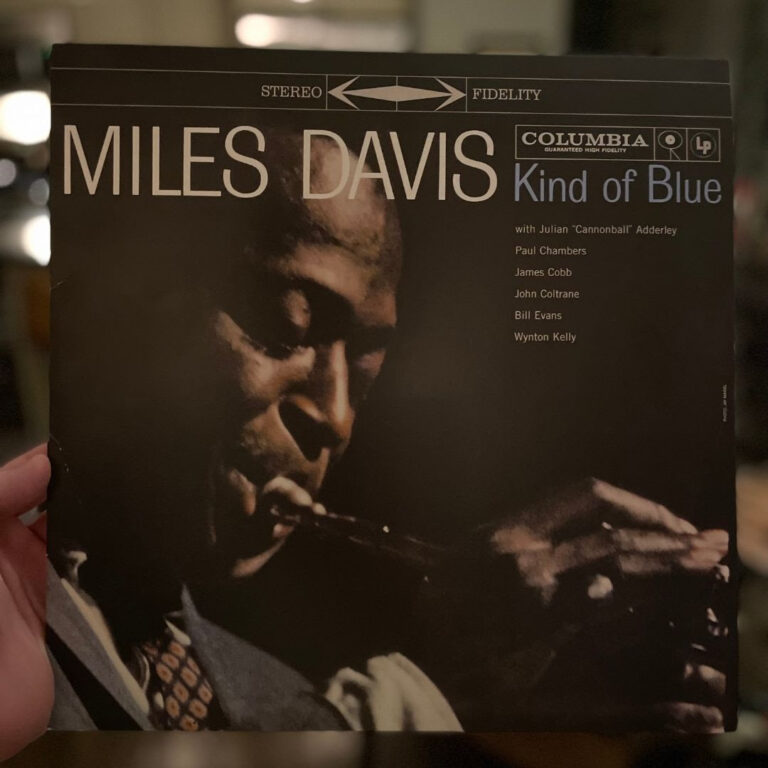 The Greatest Jazz Album Ever Made

While I’m in no way an expert on jazz, I’ve been listening to the genre for over two decades, ever since my godfather gifted me “Kind of Blue”, Miles Davis’ infamous album, for my thirteenth birthday.  And, 23 years later, that album still stands as my favorite jazz album ever made, one of the greatest in the world as a Google search quickly proves.

Beginning with the rhythmically stirring masterpiece in “So What”, the entire album is like an ocean of sound, washing over you with something at once powerful but incredibly pleasing, containing melodic ebbs and flows that stir you deep in your core. And, unlike some jazz music that’s an acquired taste, falling in love with “Kind of Blue” is as easy as Sunday morning.

The opening notes of “So What” set the scene for greatness, starting with the softest hint of a tinkling piano interwoven with a rich thumping bass that’s then joined by the crisp tin of cymbals as Coltrane and the saxophones enter… all setting up the sublime, cosmic crescendo that hits around the 1 minute 30 second mark when – as if from the gods – Miles’ trumpet comes in so sharp, so swift, so clear, and with so much swagger. Thinking about it now – listening to it now – gives me goosebumps.

The upbeat tempo in “So What” is offset by the moody, molasses-like sound of “Flamenco Sketches” with the slow, meandering escape of Miles’ trumpet lazily charting the course of the track like rich smoke wafting from a Robusto cigar on a sultry, humid night in Buenos Aires. The track reaches greatness when Davis’ trumpet is followed by Coltrane’s soulful tenor sax, taking the melody even lower, all but demanding the music wash over you in relaxation and reflection.

And then there’s “Blue in Green”: a beautiful juxtaposition of sounds both bright yet quiet at the same time.  A great friend of mine once described a scene in which a couple in a high-rise toast with champagne together on July 4th (America’s Independence Day) while this track plays softly on the turntable and fireworks burst in the distance.  To me, that scene will forever capture the magic that is this special song.

Years and years after countless plays, I still don’t know the background of the album nor the underlying meaning of the songs.  But what matters more to me is the way the music makes me feel which is to say alive in so many different ways – optimistic, reflective, impassioned, compassionate, free, capable, and a host of other emotions that, like a kaleidoscope, change based on my mood.

And while I’m certain the way this album makes me feel is different than the way it would make you feel, I’m equally certain that – if given the chance and listened to in the right way (perhaps after a long, fulfilling day in a dim room with a nightcap in hand) – it will stir you as well.