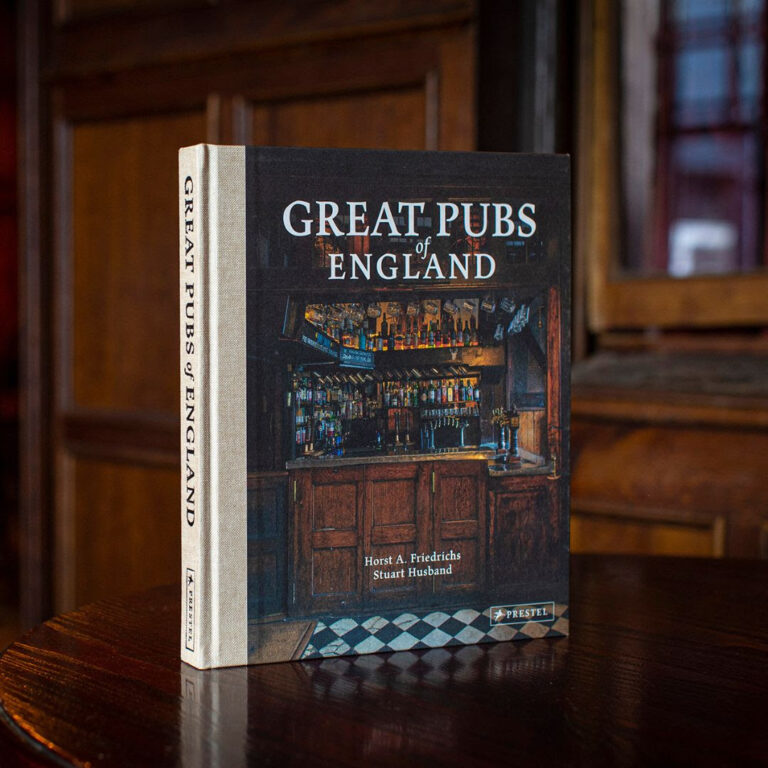 A Q&A with Horst A. Friedrichs, co-author of Great Pubs of England.

Great Pubs of England by Horst A. Friedrichs and Stuart Husband is a coffee table book that explores the best of England’s illustrious pub culture in all its idiosyncratic glory and infinite variety.

Horst, tell us a little about your background.

I was born and raised in Frankfurt, Germany from a Greek mother and a German father. I attended a college for photography in Munich and then, I worked for many years as a photojournalist and as an advertising photographer all over the world before starting to focus on photo books.

What first got you interested in photography, what inspired you to start publishing books and where has the journey taken you since?

I have always been drawn to underground but influential groups, and I love books. When I moved from Germany to London in 1997, I started my first journey into British subcultures. For 12 years I photographed The New Untouchables, an independent organization that promotes 21st-century Modernist and Sixties-inspired underground music culture, what then became the bestselling book I’m One: 21st Century Mods.

After, I turned my lens to the world of Rockers with the first book Or Glory: 21st Century Rockers. Following the great success, I asked myself “Is there anything more essentially rock ‘n’ roll than the leather jacket?”. This was when I started my masterpiece Pride and Glory: The Art of the Rockers’ Jacket, an in-depth look at the Rocker’s jacket, both vintage and modern.

Many other books followed, like Cycle Style, Denim Style and Coffee Style. Apparently, I’m the most published photographer at Prestel Publishing, with 9 books and more coming. Making books has allowed me to grow as a photographer and storyteller… it makes my commercial work better and keeps me moving forward as a creative person.

Tell us a little about Great Pubs of England and how you came up with the idea of creating it.

Speaking for myself and Stuart Husband (the writer), we wanted to showcase the full range of pubs in England today, from old-school boozers and ultimate locals to gastro-temples, cabaret venues, and legendary landlord/landlady-fronted places, and I think the book reflects that rich variety.

What’s the main idea behind Great Pubs of England and what makes it much more than just a guide?

“Best pubs” is, of course, a very subjective thing – everyone will have their favorite and will have as-they-see-it airtight reasons for it being their favorite. In a book like this, we had to balance the visual, the anecdotal, and the experiential – that is, they had to look good, they had to have a bunch of good stories attached to them, and they had to be places you’d want to linger in.

How did you select the locations to feature inside the book?

I wish I could say that we fed all these factors into a super-computer and worked off the resultant algorithm, but the fact is that we pulled together a bunch of places that we knew, that we’d heard about, and that we discovered online, and narrowed our final choices down from there.

What are some of the most interesting stories that you have collected and featured inside the book?

The Gunton Arms made the biggest impact on me in terms of interior decor, atmosphere, ambiance from all 33 pubs we visited for our book Great Pubs of England. The pub is situated in the middle of a thousand-acre deer park in North Norfolk. I love live fire cooking and had for lunch the venison that was cooked over a large open fire in the so-called Elk room. The pub reflects its owner’s passion for art and has works by Tracey Emin, Nobuyoshi Araki and Lucian Freud. The crowning final was when I photographed Ivor Braka and his beautiful dog Sammy the Saluki. Ivor is funny, eccentric and a “rock ’n’ roll art dealer Gesamtkunstwerk!

In addition to Great Pubs of England, you published other books. Tell us something about them and what they all have in common.

My first books are a summation-celebration of my journeys into British subcultures: mods, rockers, cyclists, motorcycles and classic cars. A new chapter started when releasing my book Bookstores (Prestel, April 2021) during the pandemic – a time when small businesses need support more than ever. I realized that independent bookstores are vital, fascinating pillars of our communities.

As well pubs that’s where the local communities gather. In the pub everyone is equal. My book Great Pubs of England, resulting from more than 2 years of investigation. The book brings together 33 of England’s finest and most distinctive inns, from Yorkshire dining destinations to Cornish beer shrines. I captured these places with writer Stuart Husband in all their idiosyncratic glory and infinite variety: the pub as an artistic statement, social hub, foodie pilgrimage site, personal fiefdom of legendary landlords and landladies, or repository of history.

But all pubs share the same time-honored purpose: to offer the warmest of welcomes and to lift the spirits.

We live in a world where everything moves fast and people’s attention has dropped significantly. A physical book forces us to slow down and enjoy the moment. What’s your take on it and how do you see the future of books and paper?

I grew up in the library, though I spent much of my time as a kid reading comic books. It wasn’t until I became a travel photographer that I began to read in earnest, falling for the works of V.S. Naipaul and Gabriel García Márquez. In fact, as I began to travel for work, I found that books were one of the quickest ways to connect with a place. The first thing [I’d do], whenever I arrived in, say, New York or Morocco, was always to go into a bookstore.

Where people can find out more about Great Pubs of England and where can they buy it?

The book Great Pubs of England and Bookstores are available in English and German worldwide at any bookstore.