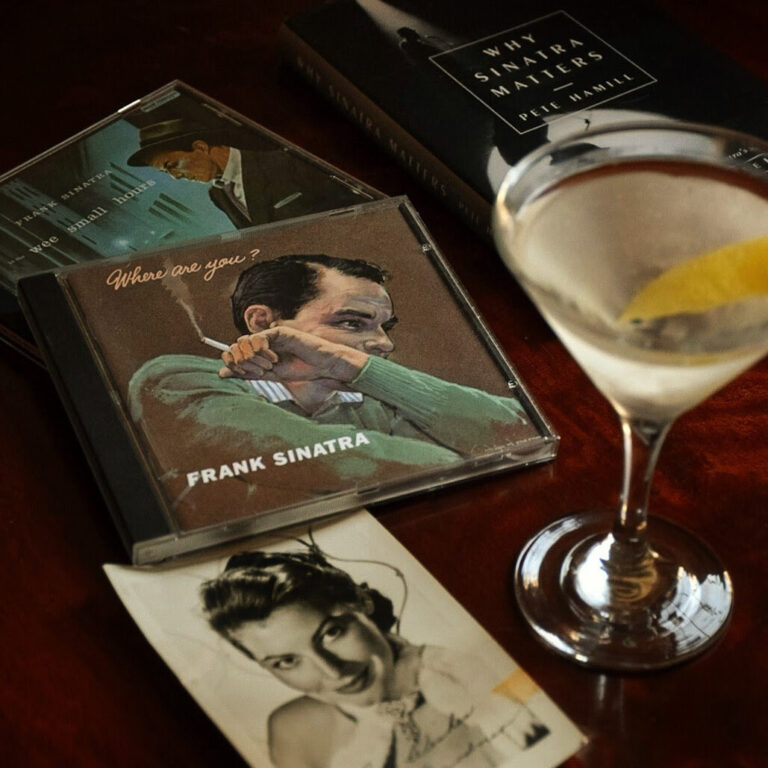 Given Sinatra’s widespread admiration amongst grown men it’s almost surprising to think that he first found fame in the 1940s crooning to teenage girls. It was the eventual loss of his voice for a time, his career, his fortune and, most notably, the loss of second-wife Ava Gardner, that meant that when listeners found his voice pressed on vinyl again it was frequently imbued with all the blue melancholy, loneliness, emotion, and sense of survival – despite it all – that he became a legend for. Whilst others wrote and arranged the songs he sang, it was Sinatra’s own deep characterization of those songs that made them resonate with anyone who had a heart. His image became as martini cool and as laden with a solitary stoicism as a painting by Edward Hopper. His voice became a cello, as great as any Italian-built masterpiece from Cremona. His music as rich and symphonic as anything by Beethoven. His songs became classics that transcend his era and will speak to humankind for as long as it can hear.

No stranger in the night when it came to extra-marital relationships, it was the media fall-out of Frank’s love affair with Gardner, whilst still married to Nancy Barbato, that caused him to first lose his appeal amongst his young female fans. Even before Sinatra’s divorce and his marriage to Ava in 1951, their relationship however was nothing if not tempestuous. Passion, sex, and heavy drinking combining with such effect that Frank would attempt suicide and Gardner would have an abortion. When she finally realized that their relationship was so explosive that they couldn’t survive it, she would be responsible for the impulse which would relaunch his career too. Rather than any horse-head-in-the-sheets Godfather myth, it was Ava’s ability to make offers that men couldn’t refuse which would be influential in landing Sinatra the role of Maggio in “From Here to Eternity” that would prove to be his launchpad into the man he would become.

Sinatra, unlike Ava, would of course go on to remarry. He would go on to sing and live the jet-set high-life as the leader of The Rat Pack. He would launch his own record label and become Chairman of the Board. He would sell-out stadiums and put on performances that would live big in the memory of anyone who ever saw him. Yet despite doing it his way until the end, no matter how huge a star he got, how elated and upbeat his songs might appear on the surface, you can’t help but hear, underneath it all, the power of a man who once lost it all.