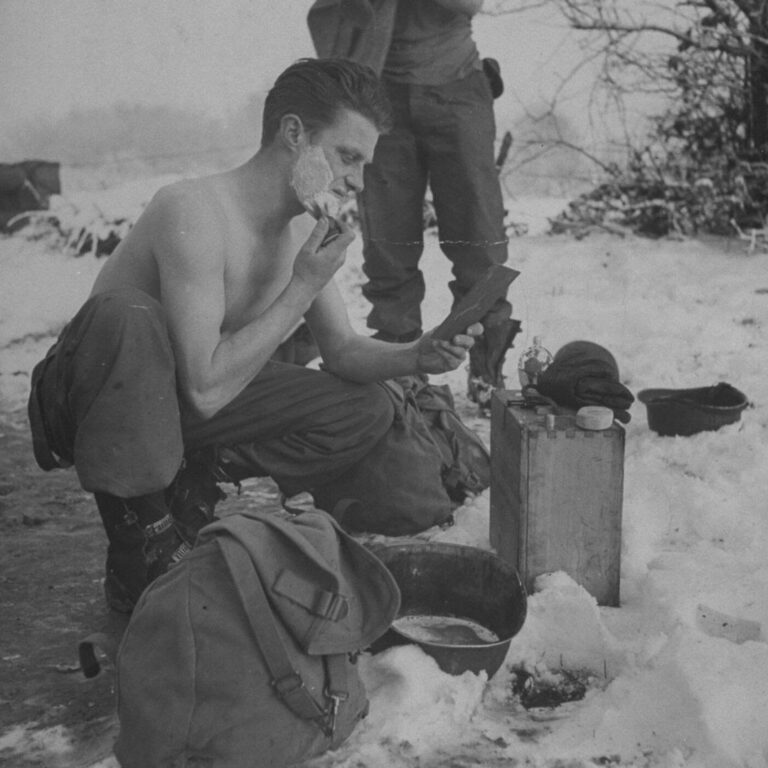 In the TV-series “Band of Brothers” there’s a scene at the start of Episode Six in which Captain Winters, battle-wearied, surrounded by bleak white snow, sits atop his foxhole next to a pile of dirt and breaks a thick layer of ice inside a spent ammunition tin. He then proceeds to use the freezing water underneath to start to shave whilst shivering in the cold. His men, many hunkered down in the dirty foxholes of Bastogne around him, take brief respite from the grueling effort to hold the line in the face of greater numbers, poor supplies and enemy artillery.

There’s something I always admired in that scene that speaks of Winters, his ideology and leadership and yet, it also speaks to something inside every man too. Shaving under such circumstances might be far a cry from the domesticity of a man shaving with warm, fresh water at home. Yet both conjure up images of masculinity. Winters shaves because he is a man. Regardless of where they might be, or their circumstance, shaving is what men do.

As the episode continues and the rest of the Easy Company men are revealed, most have stubble of varying lengths. Obvious infractions of military rules – understandably forgiven in the circumstances of war. Although Winters continues to hold himself to those standards he set during peace-time, he doesn’t judge or hold those men to account for not shaving themselves. Shaving each day, whatever the situation, is a means and a method to learn how to treat ourselves and others with respect.

When discussing a very different commander in Episode Seven, it is said that he “wasn’t a bad leader because he made bad decisions – but because he made no decisions.” One must constantly act against indifference and to try to push ourselves forward if we are to make a difference – and no matter how well you shaved today, you have to do it again tomorrow. Shaving is a reminder that you’re not perfect, that you’re a work in progress, but most importantly that if you don’t work to maintain those standards you set yourself you can go backward by just doing nothing.